The words ‘where do you go to defecate’, ‘how often do you wear shoes when you go outside’ and ‘do you know what schistosomiasis is’ are echoing around the hut. Far from this being our team bonding conversation of choice, the team are running through the results of the questionnaires from the day. Asking 5 year olds what schistosomiasis is comes up with some interesting answers; so far, the consensus varies between ‘a dangerous monster in the river’ and ‘something to eat’. Room for improvement. However, the idea is that by investigating understanding of the disease, we will identify areas to target with our education programmes to improve this understanding, and therefore improve behaviours to help reduce transmission of the parasite. Jemima has done a brilliant job this year on education – teaching sessions and songs are followed by Manu and Anjara, the Malagasy team members, running around dressed as schistosomes catching kids, which we’re hoping will be much more memorable than old-school didactic teaching. This morning at 6am, rather bizarrely I heard the songs about schisto and praziquantel filtering down from the village, so we hope it’s working…

We’re in our first village of six. Ambohitelo is a tiny wooden and straw hut village lying on the great Nosivolo river, surrounded by banana, coffee and cassava clad hills. Amazingly there are four different churches for the tiny population here (Anglican, Catholic, Lutheran, Adventist) but everyone also follows the traditional belief system, demonstrated by the spray of wooden spikes in the village centre where zebu (cows) are killed at important ceremonies. It’s a fascinating place. It’s 7.30pm, we’re sitting cross legged on the matt floor of the school which we’ve taken over as a dormitory/research lab, and we’ve had the obligatory enormous bowl of rice, with pork, topped off with the sweetest pineapple I’ve ever tasted. The chefs, a group of cackling ladies, find our attempts to imitate the Malagasy squat whilst eating absolutely hilarious, but we’re winning them over with our vocal appreciation of the food  – ‘tsara be‘. 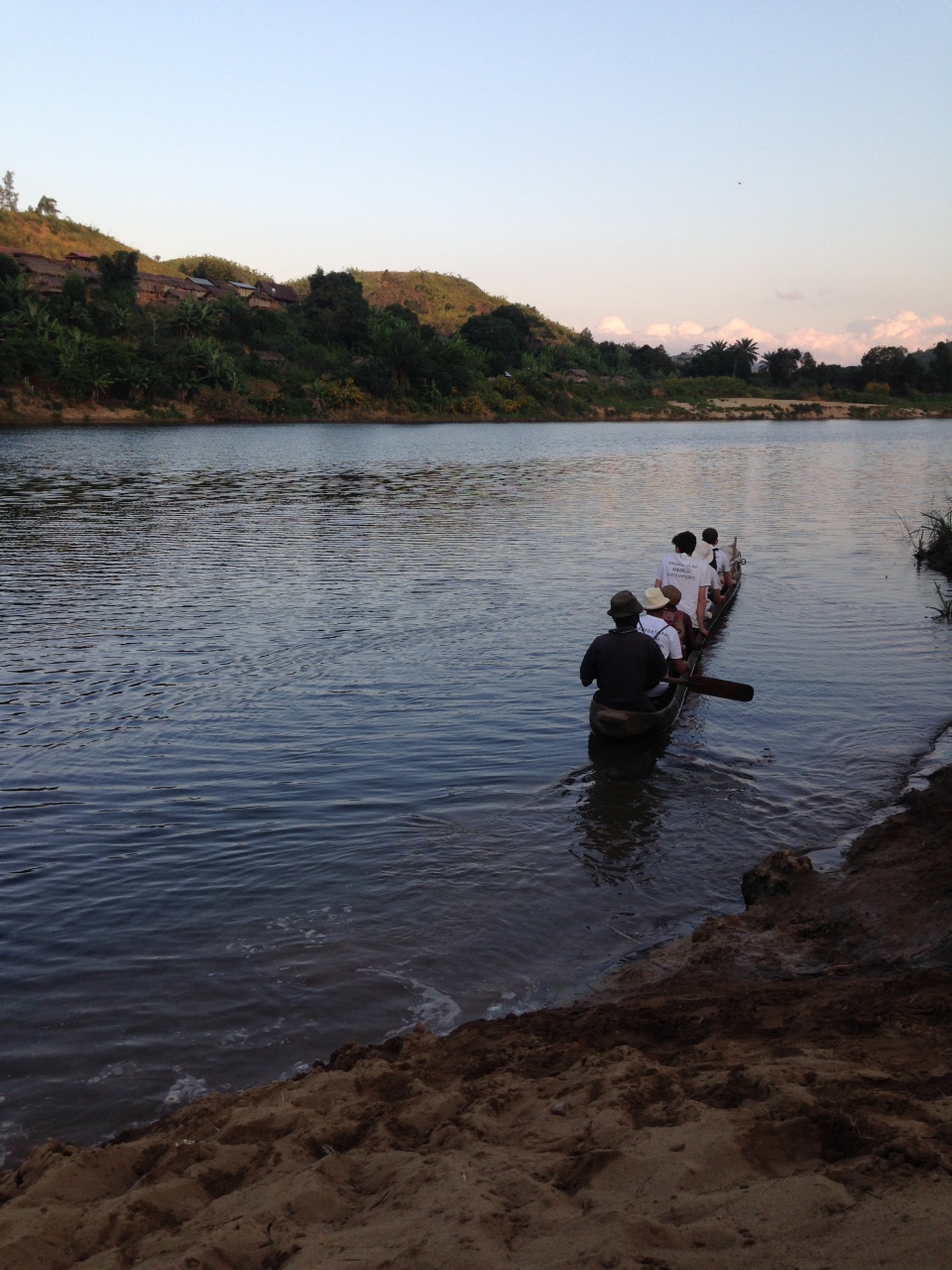 We’re all exhausted after our first solid day of research. Steve and Kate have been on point-of-care blood testing for malaria and anaemia, making absolutely ridiculous noo-noo sucking sound effects to distract the kids. Jemima and Isla have been doing abdominal exams to check for big livers, spleens and distension, repeatedly using the Malagasy word for ‘relax’ to little effect, and having to abandon attempts on the most ticklish kids, and I’ve been on anthropometrics, measuring height, weight and triceps circumference to determine if stunting or wasting is present. Corty has been corralling the kids through the stations, and Manu and Anjara have had the tricky task of questionnaires. We swap around tasks and have regular trays of uber sweet cane sugar coffee delivered by the village mums. Tomorrow lies everyone’s favourite, collection of urine and faecal samples and screening these using antigen tests and microscopy, but also bleep tests, which we have to tag in and out of to avoid the ignominy of losing to 8 year olds. This is how our next month will pan out, two days of research and one day of treatment in each of 6 villages along the river.

Coming here for a third time, it’s great to see that we are becoming more and more accepted by the community. In 2015, we think that we were the first non-Malagasys to visit the villages since a Norwegian anthropologist in the late 1990s, and our every move was a fascination to everyone here. Now, the area still feels very remote, but the people have become more used to our presence, and life goes on as usual when we’re here. As a result, we’re more comfortable venturing outside of the villages and have the trust of locals to show us a bit more of their lives. Just now we walked up behind the village for a sunset view, and ended up following the village chief who we knew from last year, through a succession of rice paddies and steep slopes to his hut where he lives for 8 months of the year to farm. We crouched around his fire in the single room house and exchanged our words of Malagasy with his family, were given the delicious pineapple, and were escorted back in the dark by a group of 8 yr olds singing songs and leading us over single bamboo bridges and through the fields back to the village, where they were told off for being back late, but happily waved us back to the school.

This familiarity also enables us to have far more in depth and meaningful dialogues with the villages. In Marolambo, and now in Ambohitelo, we’ve called meetings of all village leaders, elders, teachers, health workers and parents, and have given a presentation on schistosomiasis, the levels that we have found here and how it is affecting child development, and how we aim to go about reducing the burden of disease. We then open it up to the floor, and hear their views on our project, whether they’re happy with what we are doing, whether they think it is at all feasible, and hear their ideas on how reduce the level of disease. So far, this has be really successful, we’ve had real engagement from the villages and feedback on the project. For the community to be comfortable with project is completely crucial, so we’re very happy with the way the project is being accepted.

So far so good. The weather is fine, misty mornings burning off to blistering sun every day so far. The team is well, with new team members this year of Jemima, Kate and Isla, fitting pretty seamlessly into life here, and whilst not converted, we’re slowly getting used to rice for brek lunch and dinner, though we do occasionally talk about scones and jam… 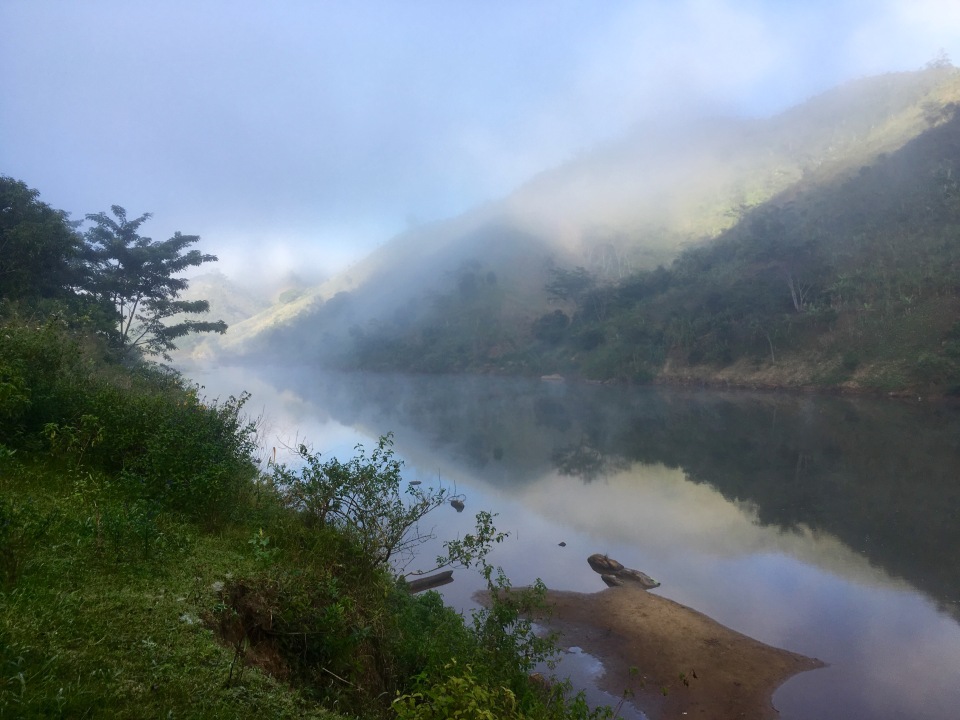